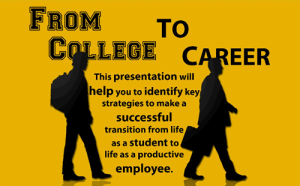 I wish we had met Daryl Capuano before my son started college. We would have saved $60,000 in tuition in the year wasted on a major that was definitely not a fit for my son. – Jim H., Branford, CT

The World of Work Has Changed

Given the radical change in the world economy during the last decade, Connecticut parents are now considering career implications more strongly when deciding to invest their hard earned money in their children’s education.  Career counseling is now becoming a needed investment before, during, and after college.

Our Expertise in College To Career Issues

Over the last few years, we have provided career counseling to hundreds of unemployed or underemployed college graduates in Fairfield, Middlesex and  New London counties. Many have wondered why their colleges and high schools spent such minimal attention on their potential careers. The main reason is that pre-Great Recession there was no particular need for either high school or career counseling to start so early. For that reason, most parents and high school guidance counselors focused on college fit.  “Fit” is and always will be an important consideration for college choice. But, practical reality demands that figuring out your child’s potential college major/career path becomes a bigger part of college selection.

Why College to Career Is Such A Big Issue

Many recent college graduates have little or no idea about the realities of the working world. Their schooling simply did not translate into figuring out what they wanted to do, in large part, because the subject had never been discussed.

When expressing their emotions to us, our young career counseling clients have expressed despair (“All this education and no place to go!”), to anger (“Why didn’t my parents or my schools help me figure this out?”), to cynicism about careers (“I hear that the working world is horrible, so I hope to avoid it for as long as possible!”).

True to conventional wisdom, our career counseling clients who studied liberal arts experienced a greater proportion of angst. As products and fans of a liberal arts education ourselves, our young liberal arts friends had our sympathies. They were often in a funk regarding their college major. While they liked certain subjects, they heard anecdotal feedback about unemployed English and history majors and were starting to worry.

While business majors seemed to be better suited to choose a major among their more limited options and knew they were heading into “business” – whatever that means – they, too, also had little idea about the real world of work. Indeed, their disillusionment was equally profound. Many of these students and graduates had a distorted view of careers. They envisioned running a large entity, a la Bill Gates, leading numerous employees, and performing big-picture, fascinating work every day. They were beginning to realize that the vast majority of entry-level jobs in the business world were contained in faceless cubicles in mundane corporations doing repetitive operational tasks. Any dreams of graduating and soon leading the next Microsoft were vanishing quickly. In addition, many business majors had hoped that the declaration of “going into business” would be a sufficient answer to the question of “What do you want to do?” They now understood that a business job might mean an accountant crunching numbers for a large insurance corporation in Hartford. Or it might mean creating layouts for a three-person marketing firm in Darien.

They were discovering that, even though they were more practically oriented than their liberal arts peers, they, too, had no idea what they wanted to do.

Our work has involved guiding our parents and students in practical fashion to find work that both provides income in the short run but career direction in the long run.

Your college major is part of your brand. Choosing a college major has serious career implications so take that decision seriously.

Most importantly, some Connecticut parents will be investing a quarter million dollars per child for a college education.  While some on Connecticut’s Gold Coast can easily justify such expense without worry about career outcomes, most parents about to send their children to college would be wise to start considering college to career outcomes now.